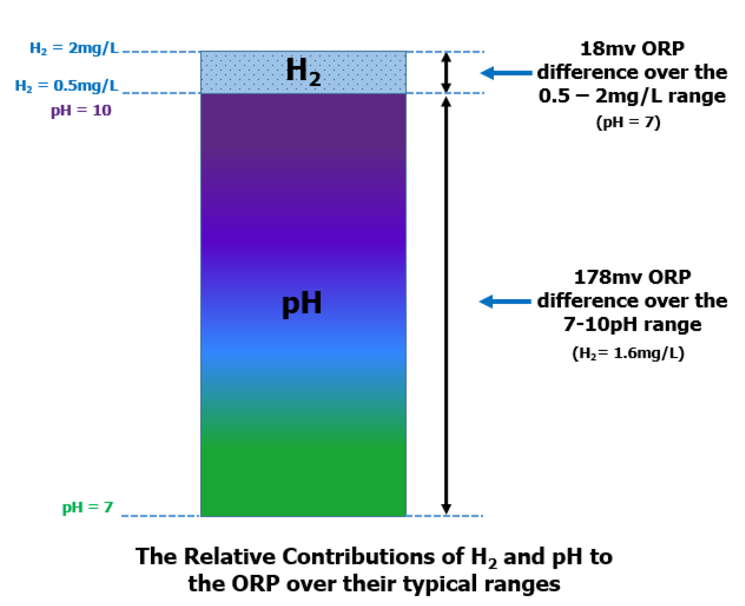 ​​​​​Other types of hydrogen water devices, hydrogen infusion machines (HIM's), utilize a proton-exchange membrane (PEM) to make H2 water, and do not perform electrolysis directly on the drinking water. Instead, they produce hydrogen gas in a small electrolysis chamber, and then infuse the filtered drinking water with the gas using a special device called a "dissolver". Therefore, depending on the pH of the hydrogen water being tested, ORP measurements will produce very different (and often confusing) results, making it impossible to use the ORP reading for measuring dissolved H2 levels or for evaluating the therapeutic benefit of the water.

​Water containing dissolved H2 gas is often called "antioxidant water". And, in fact, research confirms that, in biological systems (in vivo/live cell, animal and human), ingestion of H2 can result in reduced levels of dangerous free radicals (reactive oxygen species, ROS), resulting in an overall reduction in levels of oxidative stress. Research also shows that, under non-biological conditions (test-tube, cell-free), H2 can act as a conventional antioxidant, and scavenge free radicals, including the dangerous hydroxyl radical (*OH).  Conventional antioxidants protect our bodies by donating electrons to free radicals, thereby neutralizing them. The balanced equation which describes the direct scavenging of the hydroxyl radical by H2 is:

Where does the negative ORP reading come from and what does it mean?​

Why do some waters containing dissolved H2 have an alkaline pH, while others are closer to neutral?​

Electrolyzers (alkaline ionizers) produce H2 gas at the negative cathode by reducing (adding electrons to) H+ ions to H2 gas using electricity. Because H+ ions are the acid component in water, their consumption during the  production of H2 gas elevates the pH of the drinking water into the alkaline range ( above 7pH) as the hydroxide level (OH-) rises.​ The following equation describes the reduction of H+ ions to H2 gas:

Viewing the relative contributions in this way, it can be seen that, over a typical range in H2 concentration, 0.5 to 2mg/L, the ORP will only change by a total of 18mV. Conversely, over a range of 3 pH units, the ORP will change 178mV. Therefore, over their respective typical ranges, the pH contributes approximately 90% to the ORP reading, while H2 contributes only about 10%.

"Analysis of the Relationship between Dissolved Molecular Hydrogen Gas, pH and ORP using the Nernst Equation".

The complete 22-page article in PDF format is available here:

The bottom term, H+, is the ion whose concentration determines how acidic water is, and is the "H" in pH (potential of hydrogen). This is significant, as it tells us that the ORP measurement is influenced by the pH of the water being tested.

(Note: although pH means "potential of hydrogen", pH represents the concentration of the hydrogen ion, H+, not H2 gas)

Both species of hydrogen contribute to the final ORP reading, producing a small corresponding voltage potential at the electrode (based upon their relative concentrations and # of electrons) contained within the meter's probe assembly. The meter amplifies and compares the voltage measurement against an internal reference, and displays a digital reading (usually in "millivolts"). However, while the dissolved H2 gas (a reducing agent) is responsible for the negative ORP reading, the magnitude of the reading does not directly correlate with the amount of dissolved H2 gas in the water, and cannot be used as an accurate "measurement" of the dissolved H2 concentration. It is also

Neutral-pH devices will produce water having a less-negative ORP reading    than alkaline devices, even if the water contains higher levels of dissolved H2

ORP, or "oxidation-reduction potential" (also called "redox potential"), is a measurement of water's tendency to act as either a reducing agent (electron donor), or oxidizing agent (electron acceptor). A positive ORP indicates the presence of potential oxidizers, while a negative ORP indicates the presence of potential reducers. The measurement is done using an ORP meter, which includes a probe designed to be inserted into the water being tested. The ORP of water produced by ionizers, hydrogen infusion machines (HIM's), and other hydrogen water technologies (e.g. H2 tablets, sticks, cartridges, etc.), will typically measure some negative value (-100 to -750mV, depending on pH). Keep in mind that this "measured potential" only indicates the water's tendency to act as a reducer/oxidizer, and does not guarantee that any particular oxidation/reduction reaction will occur, or indicate the strength or speed of the reaction if it does occur. In order to know whether or not any oxidation or reduction reaction will occur inside the body, the chemistry associated with the reaction in question (kinetics/thermodynamics) must be thoroughly investigated and understood.

​While there are meters which do measure dissolved H2 gas, these meters, which utilize sophisticated hydrogen gas probes, are very expensive and can cost thousands of dollars. Relatively inexpensive meters (500 dollars or less) currently available, claiming to measure dissolved hydrogen, DO NOT use hydrogen gas probes, but are, instead, based on the ORP-meter platform, and use ORP-type electrodes. These meters attempt to approximate the level of dissolved hydrogen using the water's ORP measurement. Because of their sensitivity to pH, these meters are recommended by the manufacturer to be used only to test neutral-pH H2 water (not alkaline-ionized water), and must assume that the pH of the water being tested is exactly 7. But, because of the large contribution of pH to the ORP measurement described earlier, even a small variance in the pH from neutral 7 (which is inevitable and difficult to control) will cause the measured H2 reading to vary significantly.

As an alternative, the H2Blue hydrogen test reagent, which reacts directly with the dissolved H2 in the water, provides an accurate, easy and affordable way (about 50 cents per test) to test your dissolved H2 levels over a wide range of pH.

The graph above of ORP (vertical axis) vs both "pH" and "H2 concentration" (horizontal axis) shows that, while the ORP reading is extremely sensitive to changes in pH (red line), it is relatively "insensitive" to changes in H2 (blue line). Because of this, even small variations in the water's pH can result in large changes in the ORP reading, masking the relatively small contribution made to the ORP by the dissolved H2.  Below is another way of viewing the relative contributions to the ORP value made by pH and H2 in terms of their percentages: 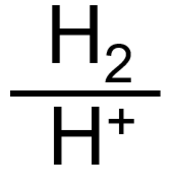 Notice that the H2/H+ redox couple mentioned earlier (circled in red) is contained within the equation (the brackets signify "concentrations").  Just like the ORP meter, the Nernst equation must "know" the relative concentrations of each species of hydrogen to predict the ORP. The equation also includes other important chemistry values and variables (water temperature, gas constant, number of electrons transferred, and Faraday's constant). Using the Nernst equation, along with selected values for pH and H2 levels, we can predict the effect that changes in each will have on the resultant ORP measurement. These predictions can then be used to analyze and understand the relationships between the pH (concentration of H+), H2 concentration, and the ORP measurement. Note that, in order to simplify this explanation, the presence of other oxidizing redox couples, which also contribute to the final ORP reading, have not been considered.

As discussed earlier, the ORP measurement is very sensitive to changes in the water's pH (H+), but insensitive to changes in dissolved hydrogen gas. Because ORP is the result of the relative concentrations of two species of hydrogen in the water (H+/H2), a change in the concentration of either species will change the ORP measurement. Therefore, H2 water from a neutral-pH hydrogen water device with its much lower average pH, will measure a lower-magnitude negative ORP reading than alkaline water, even if it contains twice as much dissolved H2!

In chemistry, the well-known Nernst equation is used to predict reduction potentials (ORP) in a variety of systems. The form of the Nernst equation used for dissolved hydrogen gas is (Emv= ORP):