8. The Data Analyzer, a combination of hardware & software, compares the detector’s measurement to a calibrated value, and, based on the response, calculates the amount of H2 gas in the sample using an area-under-the-curve (AUC) algorithm (below).

Gas Chromatography (GC) is one of the most widely-used analytical tools for analyzing chemical constituents. Using gas chromatography, the H2 concentrations of almost any type of product can be measured. These include products such as fruit smoothies, juices, lotions, carbonated beverages, milk, etc., which can be difficult or even impossible to accurately measure using conventional means such as reagents or probes. At H2 Sciences Inc., we now calibrate and verify the performance of H2Blue using GC.

Gas Chromatography (GC) is a technique used to separate compounds in mixtures by analyzing the interaction that occurs between a gas (mobile phase) and a polymer material (stationary phase) contained within a long tube called a column.  The column is used to separate the individual components contained within a sample (while GC is capable of measuring many other gases & compounds contained in a sample, our testing focuses on the dissolved H2 gas). The test sample is injected into the GC injector port, and the dissolved hydrogen is “volatilized” (removed from the water) using heat. The volatilized sample is then forced into the column using a pressurized, inert carrier gas (typically argon or nitrogen). After traversing the length of the column, the gas passes through a thermal conductivity detector (TCD), where the presence of the gas influences the electrical characteristics of a tungsten-rhenium filament.  The detector’s response will be proportional to the concentration of the dissolved hydrogen gas contained in the sample solution and will result in a small, but measurable, change in voltage drop. By comparing the detector’s response over time to a stored calibration standard, the GC can determine the unknown concentration of hydrogen present in the test sample.
​ 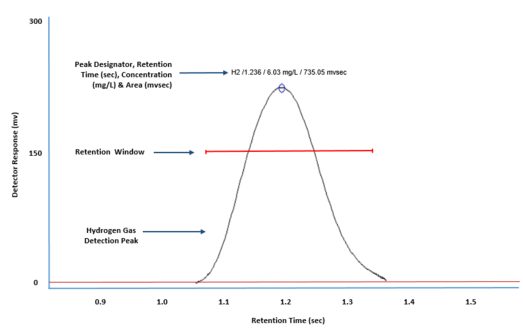 7. At the end of the column is the Thermal Conductivity Detector (TCD). The detector contains two sets of heated filaments, one exposed only to carrier gas, and the other exposed to the carrier gas + sample mixture. The difference in thermal response between the filaments produces a voltage differential proportional to the amount of dissolved H2 gas in the sample (below). 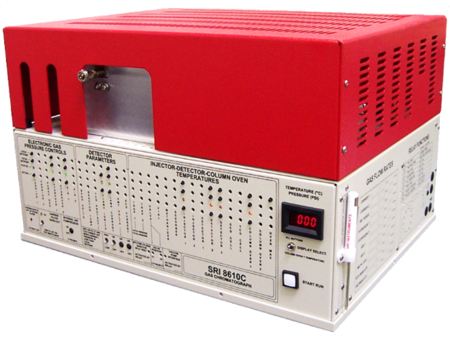 1. The Carrier Gas is introduced from a pressurized gas cylinder located outside of the machine. The carrier gas is used to transport the test sample through the machine. The carrier gas for testing H2 is usually nitrogen or argon.
2. The flow rate & pressure of the carrier gas are controlled by aFlow Regulatorto give the clearest separation of the components in the sample.
3. The water test sample (containing the unknown level of dissolved hydrogen gas) is injected into the carrier gas using a Sample Injection Syringe. Because direct injection of even small amounts of water can be problematic for the GC, an indirect sampling method called “static headspace analysis” is often used.
​
4. The sample mixture enters the machine through an Injector Port, where it is combined with the carrier gas before traveling to the column. In gas chromatography, the mixture of carrier gas and the test sample is called the “mobile phase”.
​
5. The Column (below) is a thin, 12’-long coiled tube, packed with a porous polymer adsorbent. Because different compounds travel through the column at different speeds, the column is able to separate-out the compounds contained within the sample by measuring the column transit times for the test compounds, each of which will require a different amount of time, referred to as "retention time".
6. The column is housed within a thermostatically-controlled Oven(below) that keeps it at a high enough temperature to ensure that the sample remains in gaseous form. The dissolved hydrogen gas (and other compounds) contained in the sample separates out as it moves through the column, which contains what is called the “stationary phase”. 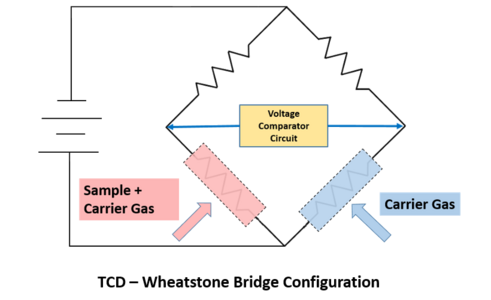 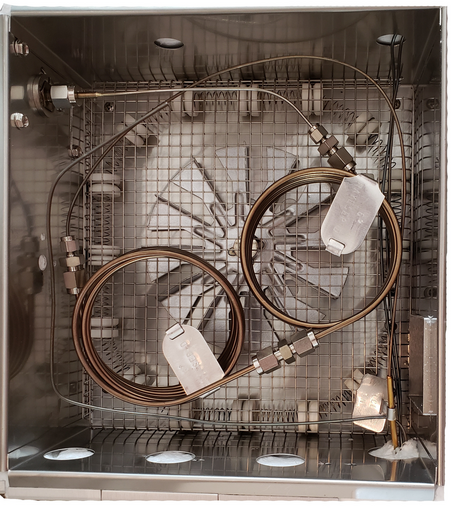 Based on the results obtained from the detector response, the software prepares a graphic representation of the results called a chromatogram, along with a report showing relevant information about the test methodology and conditions, and technical GC information such as type of carrier gas, column & detector, etc. A sample chromatogram is shown below. 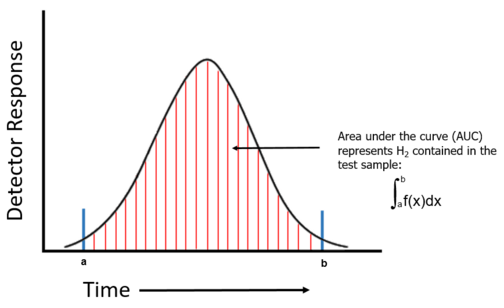 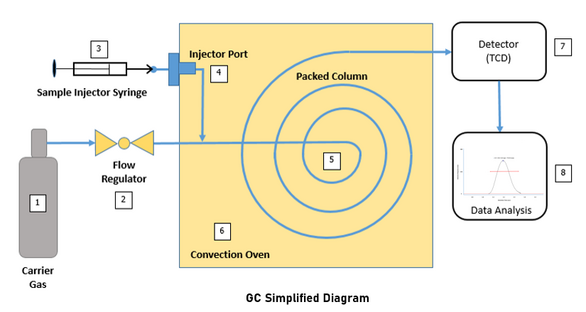